One of Manhattan’s most published fire commanders, Deputy Chief Vince Dunn, estimated that his firefighters could effectively control an office fire in a tall NYC building if it had not spread to involve more than 230 square metres of floor space. This practical assessment became reality when Chicago firefighters were faced with a fully involved fire in a 240 square metre compartment high up in the 67 West Washington fire in 2005, where only the deployment of exterior streams from tower ladders were able to control this amount of fire spread in an office fire, where six people were to lose their lives.

The previous article (BS 9999 configured Rising main/stand-pipes) showed how BS 9990 rising mains will reach their maximum suppressive capacity, at less than 300 square metres of fire involvement. Even though their configuration at one rising fire main serving every 900 m2 of floor area, supporting maximum hose-lays of 45-60 metres, the maximum flow capacity of the mains has to be questioned. Some of the world’s most serious office fires have occurred in sprinklered buildings whilst the sprinklers have been decommissioned for works. Whilst a BS 9990 rising fire main may be adequate for residential apartment fires, the increased compartment sizes and higher fire load densities now seen in office buildings would require higher flows than 1,500 L/min (400 gpm). The NFPA guidelines for standpipe flows would certainly appear more appropriate. 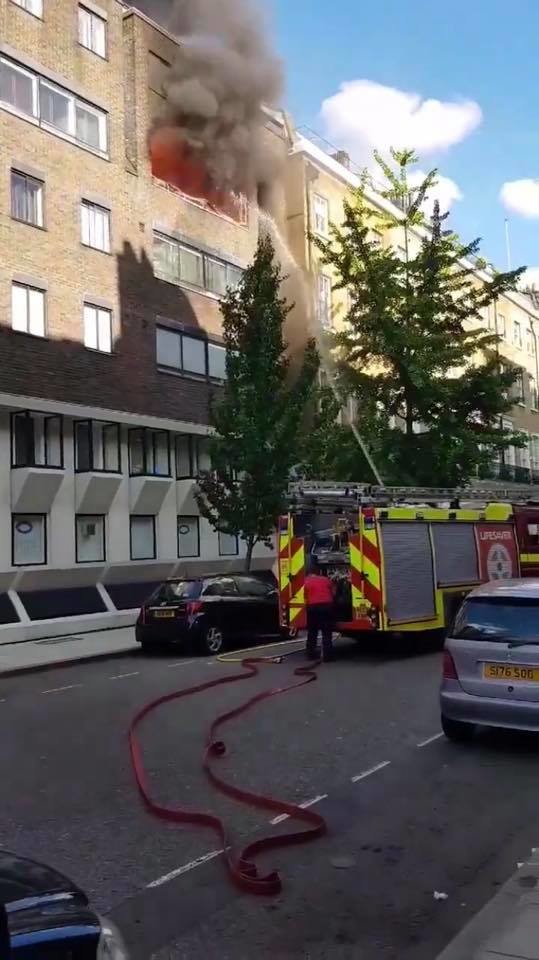 The old fire service maxim of ‘putting the wet stuff on the red stuff’ actually doesn’t hold true. In 2002 I undertook research of UK firefighting flow-rates by visiting eighty percent of UK fire services and working with them to identify expected flows from hose-line and nozzle combinations. Although each service believed they were flowing exactly what the rating for their branches (nozzles) suggested, nearly all were under-flowing by a large amount. Many were only achieving fifty percent of their expected target flows and some were down as low as 20 percent. The lack of awareness and technical understanding of the importance of transporting and flowing adequate water on the fire-ground was widespread. Even now there is little appreciation for matching flow-rate with typical energy release in fires.

Taking adequate water from the hydrant grid and transporting it up to the attack team is a task that demands understanding of basic pumping practice and hose-line/nozzle configurations. To optimise the available water is something we are generally failing to do when it comes to application. Few fire services transport their water effectively and many are unable to configure fire stream applications to make the best of available water. Inline pumping configurations where two pumps optimise the transport of water into a dry rising main is one method to be used. The use of high-flow or non-automatic nozzles in tall buildings at height (10 storeys or more) is another way of maximising flows. The redesign of pump pipework and some pressure governors is yet another way that flowing water may be optimised, whilst the change up to larger (22mm) hose-reels will serve to keep firefighters safer and reduce building fire damage.

Water flows from the hydrant grid is reducing, as is pressure, and using our skills, knowledge and awareness whilst optimising equipment configurations and building design provisions is something we need to work on. These are topics I have been passionate about and covering since 1984, further publishing articles on since 1990.